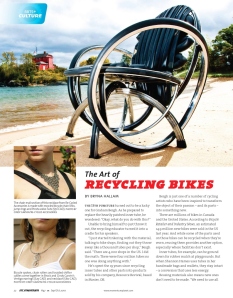 The 13th puncture turned out to be a lucky one for Graham Bergh. As he prepared to replace the heavily patched inner tube, he wondered: “Okay, what do you do with this?”

Unable to bring himself to just throw it out, the recycling educator turned it into a cradle for his speakers.

“I just started tinkering with the material, talking to bike shops, finding out they throw away like a thousand tubes per shop,” Bergh said. “There are 4,000 shops in the US. I did the math: There were four million tubes no one was doing anything with.” END_OF_DOCUMENT_TOKEN_TO_BE_REPLACED

Isla Holbox, on the northeastern tip of Mexico’s Yucatan peninsula, hosts the largest seasonal meeting of whale sharks in the world. Go snorkeling and help the Shark Research Institute collect photos and information about the benefit of whale shark tourism to the local economy. (sharks.org—click on “expeditions”)

Photographers can contribute to the Ecocean Whale Shark Photo-identification Library (whaleshark.org), a visual database of whale sharks used by marine biologists to learn more about the giant fish.

Whale sharks can be agitated by aggressive behaviour like chasing or touching. The whale shark code of conduct (developed by The Shark Trust, the Australian Department of Conservation and Land Management, and PADI and the Project AWARE Foundation) recommends staying at least three metres away from whale sharks. Boats should keep speeds under six knots, and turn motors off within 100 metres of any whale sharks.

Fall 2009 | Verge Magazine | Ran with Swim With the Sharks

If you can’t beat them, enjoy them: tourism may mean a new lease on life for whale sharks off Mafia Island.

There are seven people in the small boat lurching over the waves around Tanzania’s Mafia Island. It’s a sunny day but the wind is up, and it’s hard to see anything in the rough waters of the Indian Ocean—even a 13 metre, 13 tonne, grey and white shark.

Whale sharks, the world’s largest living fish, live on plankton and are harmless to humans. Every year, between October and March, hundreds of the spotted giants pass near the island, giving residents an opportunity to attract tourists with whale shark tours. END_OF_DOCUMENT_TOKEN_TO_BE_REPLACED