There is peace in the Great Bear Rainforest, but it is a tentative peace.

Over the past four years, stakeholders—local communities, logging companies, labour, tourism and conservationists, among others—have sat down and banged out a land-use plan for the Central Coast, also known as the Great Bear Rainforest.

Located along B.C.’s coast between Bute Inlet and the Alaskan border, the Great Bear Rainforest is the last, largest stand of intact temperate old growth rainforest in the world, as well as the largest contiguous area of unprotected rainforest.

It has been nearly two years since those groups completed the first of two consensus agreements on land-use in the Great Bear Rainforest. Those agreements were followed by direct negotiations between provincial and First Nations governments in order to finalize the plan.

Although far from perfect, the plan is significant: it marks the first time the different sides have agreed on pretty much anything.

They’ve come up with a plan, but now it is all at risk, thanks to the provincial government, who missed a self-imposed December 2004 deadline for approving the agreement. Two additional deadlines—Spring 2005 and “end of summer”—have since passed, and stakeholders are worried there is more than the agreement at risk: much of the funding was promised based on approval. If it takes any longer, that funding might just disappear.

Roughly 8.5 million hectares of ancient cedar, salmon, wolf and bear habitat in the temperate rainforest are at stake, along with a billion dollars in wood and wood products sales and $200 million in financing for conservation-based economic initiatives.

Even more than that, 10 years of work at changing how environmentalists, industry and First Nations interact could be undone.

“For years, all parties set aside confrontation in favour of negotiation,” said Amanda Carr, a Greenpeace campaigner. “But the value of the negotiation route is in question given the [provincial government]’s continued failure to meet commitments and timelines.”

Life in the forest

Heralded by Time magazine in 1999 as “the number one environmental issue on the planet,” the Great Bear Rainforest is home to dense grizzly populations, rich salmon runs, and the rare white spirit (kermode) bear.

The area is also home to 41,000 First Nations people. For many communities, this agreement represents a sustainable way of doing business.

Klemtu Tourism, for example, is an eco-tourism business owned and operated by the community of Klemtu, the only occupied village in Kitasoo/Xai’xais territory.

Evan Loveless, who works with Klemtu Tourism, says the agreement is integral to the future success of the business. “The proposed protected area will be essential for sustaining eco-tour activity in the region,” he said. “Also, the proposed protected area becoming official will create a huge impact as far as putting the area on the ‘tourism map.’”

Loveless also says the agreement will attract the proposed conservation funding that will help put tourism on the same footing as forestry and aquaculture. 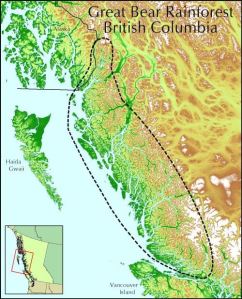 Twelve years ago, protestors focused on another rainforest and took to the woods in Clayoquot Sound in the largest act of civil disobedience in Canadian history—900 people were arrested. Eyes turned towards B.C. and awareness about logging practices in the province spread.

The Clayoquot protests paved the way for action on the Great Bear Rainforest. Blockades sprung up across logging roads, halting work for weeks at a time; consumers around the globe urged the B.C. logging industry and the government to adopt sustainable forest practices; and pressure on companies by environmental groups started to have an effect.

Over 80 companies, including Ikea, Home Depot, Staples and IBM, committed to stop selling wood and paper products made from ancient forests.

In addition, German pulp producers and magazine publishing associations supported limited logging in the Great Bear Rainforest and urged companies, environmentalists and the provincial government to find a shared solution.

The quest for a solution was plagued with problems from the beginning.

It was not until two years later that environmental groups came to the table for the Central Coast Land and Resource Management Planning process in exchange for a temporary moratorium on logging in large intact rainforest valleys.

With the groundwork laid, it seemed the real work could finally start to happen.

On April 4, 2001, after four years of meetings, the B.C. government, First Nations, industry, environmentalists, and local communities agreed to create protected areas and to explore how ecosystem-based management (EBM) could be used in the coastal rainforest.

The purpose of EBM is to achieve healthy ecosystems and healthy human communities that can coexist—because ultimately humans cannot be sustained unless ecosystems are sustained.

As the CIT points out in its review report, people may benefit in the short term if ecosystems are put last, but eventually they will suffer. If ecosystems are put first, human wellbeing will be secure; however, if socioeconomic needs are not met, ecosystem protection is likely to fail. As a result, maintaining ecological integrity and human wellbeing requires a strong emphasis on both.

EBM’s guiding principles are to maintain ecological integrity; promote human wellbeing; sustain cultures, communities and economies; recognize Aboriginal rights and titles; apply the precautionary principle; and ensure people have a fair share of the benefits of their ecosystems. The key elements of EBM planning include conservation planning, socio-economic planning and risk management.

EBM sounds like a near-perfect plan for sustainable land-use.

Of course, that would depend on whether or not the CIT’s scientific recommendations were followed.

That’s where things seem to have gone wrong.

While the agreement itself might be groundbreaking, there is some question as to whether the contents of the agreement are as significant.

Despite all the money funneled into CIT by the government and others to get the “best science available,” their recommendations haven’t always been followed. For example, CIT recommended that at least 44 per cent of the area should be protected; in the most recent proposal, only about a third of it actually will be.

In addition, CIT’s recommendations have been adopted only as a guide, not as legally binding changes to the way natural resources are used. This, says the David Suzuki Foundation, means that government and industry can continue to exploit natural resources.

This has become one of the biggest criticisms of the Great Bear plan.

Unfortunately, a decision was made by some in the environmental community to drop the hammer and sit down and try to negotiate with the companies. This was and remains a mistake because it unfortunately legitimizes the actions of these companies.

Many groups contend that the level of protection is insufficient to protect species over time.

“In essence,” said Ian McAllister, conservation director for the Raincoast Conservation Society, “the plan does not sufficiently protect the quantity and quality of habitat recommended by leading scientists to ensure the future of sensitive coastal animals like bears, salmon, grizzly bear and wolf, to name a few, plus the actual form of protection is questionable.”

In a study commissioned by Raincoast, bear biologists Dr. Brian Horejsi and Dr. Barrie Gilbert show that 80 per cent of grizzly bear habitat will remain unprotected in the land-use plan.

In addition, says McAllister, the majority of proposed protected areas allow trophy hunting of wolves, and grizzly and black bears. He claims the plan also fails to follow the precautionary approach—that actions suspected of being harmful should be banned unless they are proved harmless—as called for by EBM principles.

“We would like this plan recognized for what it is—a land-use plan that is based largely on political and economic interests not in science and ecological processes,” said McAllister.

Clearcuts in the forest

McAllister believes that involving timber companies in the planning doomed the process to failure.

“If our priority . . . is to ensure adequate environmental protection while offering economic opportunities for First Nations and coastal communities, well, the only player that can be eliminated with limited cost is the timber companies,” he said. “Eliminate them and everything in the Great Bear becomes possible. Continue to accommodate them and everyone will ultimately lose.”

According to a report by the David Suzuki Foundation, logging has continued in the Great Bear. And because of the delay in approving the negotiated land-use plans, logging continues under the current regulations of the B.C. Forest Act and the Forest and Range Practices Act, which are a far cry from the EBM that the CIT called for.

Since the 2001 agreement, over 300 cut blocks have been logged in the Great Bear Rainforest; 74 per cent of logging is done by clearcutting, which removes 70 to 100 per cent of the trees on a specific logging site.

In their report, the David Suzuki Foundation says, “EBM objectives and targets that would serve to protect ecosystem values are limited by economic objectives.”

“Unfortunately, a decision was made by some in the environmental community to drop the hammer and sit down and try to negotiate with the companies,” said McAllister. “This was and remains a mistake because it unfortunately legitimizes the actions of these companies.”

Timber companies got involved with the plan through the Joint Solutions Project, an initiative formed by nine environmental groups and forestry companies to collaborate on finding new solutions to longstanding environmental disagreements in the Great Bear Rainforest.

“It has been an amazing transformation to see two divergent interests find a way to partner together on land-use recommendations in Coastal B.C. that makes sense for both the environment and forestry,” said Ric Slaco, Vice-President and Chief Forester of Interfor, in March.

“Five years ago, our business was at risk as B.C.’s forest practices came under fire from a number of environmental campaigns,” wrote NorskeCanada president and CEO Russell J. Horner in an April letter to Premier Gordon Campbell. “Fortunately, the innovative collaboration that became known as the Joint Solutions Project completely changed the perspective of B.C. held by many of our customers . . .”

Those new perspectives are based on a plan that hasn’t yet been approved, and that’s causing some problems for industry, as business people and buyers are wondering why things haven’t changed yet.

Forestry representatives claim they are ready to adopt EBM principles—if only they would be passed into law and made clear for those on the ground.

Though he believes the plan is flawed and “should only be considered a first step towards the goal of protecting the Great Bear—not a final solution,” Raincoast’s McAllister wants to see it approved by government. “We will maintain our efforts in securing more protection,” he said.

We wanted to meet the recommendations of the scientists, but we couldn’t.

-Lisa Matthaus of the B.C. chapter of the Sierra Club of Canada

Lisa Matthaus, from the B.C. Chapter of the Sierra Club of Canada, acknowledges the shortcomings of the agreement. “We wanted to meet the recommendations of the scientists,” she said, “but we couldn’t.”

According to Matthaus, the only reason the environmental groups are agreeing to the plan and continuing to be supportive is because it is a package of protected areas and a commitment to implement EBM by March 2009.

“The protected areas alone are not sufficient,” she said, “but this is a political compromise. You need to have a lot of parties in agreement.”

And as it stands, those involved have agreed. What remains is government approval.

According to Matthaus, government-to-government negotiations between the provincial government and First Nations are still ongoing. “There are outstanding elements they are still trying to finalize,” she said. “There is still a possibility, a strong hope that this will go to cabinet before Christmas.”